Posted on April 10, 2014 by bfoulkesadventures

My awareness and appreciation of Turkey and, in particular, Istanbul starts with geography. As in real estate, geo-political location is everything. 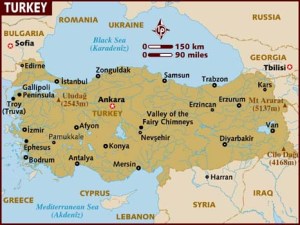 Turkey is smack dab in the middle of a complex, complicated neighbourhood. Today, its neighbours consist of Greece and Bulgaria on the European side; Syria and Iraq are on the southeast, a volatile dangerous block made more so by the Kurdish complication. Russia, Georgia, Armenia and Iran, backed up by the bad boys of the ‘Stans’, form the eastern border. With such neighbours nothing is simple, neutrality is almost impossible.

The rest of Turkey’s geography is defined by two strategically significant bodies of water – to the north, the Black Sea, and, to the south, the Mediterranean. More interestingly, the tight spot in the funnel connecting east and west, the link between Asia and Europe, has Istanbul. It is the shortest water crossing point; the Dardanelles and the Bosphorus link the Black Sea to the Mediterranean – a hot spot traffic intersection if there ever was one. Russia’s recent incursion into the Crimea which destroyed any potential for its Olympics to favourably shape international public opinion was driven by its political imperative for a port in the Black Sea and access to open water and the Mediterranean.

Life is complicated when you live at the busiest street corner in town, where everyone needs to protect and advance their interests, everyone and wants to set up shop, where those with ambition want to control the traffic, take a toll or two from passersby and expand their empire beyond the local neighbourhood. It is a place where, for millennia, everyone wants to walk across your lawn, covets your back yard and wants to stay in your house and use it as a fort or a staging area whenever convenient. Lots of folks are strutting their stuff and throwing their weight around.

The Turks have never had a quiet, predictable or life; which brings us to Istanbul. My immediate observation on arriving in Istanbul is how modern it is, how European normal it is, how well it functions and how clean things are. This is not the third world, it bustles and hums. The airport works, the taxis are clean and efficient, my hotel in the old district of Sultanahmet is small but could easily be called a boutique; it’s charming. The people are friendly, busily efficient and unfailingly helpful. 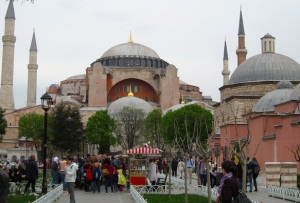 We have only a short time in Istanbul before starting our cross country Turkey exploration so my impressions are immediate, superficial and visceral. The Hagia Sophia, now a museum rather than the shrine/church/mosque it has been since it was consecrated as a church in 537 AD is illustrative. It is huge, eclipsing any place of worship I have seen. It changed ownership in 1437 and was converted to a mosque. The fact that it still exists is testimony to the good judgement of the Ottomans; Mehmet the Conquerer saw in its majesty something to preserve rather than destroy.

Think for a minute, the conflict between Islam and Christianity was vicious and prolonged, costing uncounted lives and untold pain and suffering – fighting over religion seldom brings out the best in us. Yet the Hagia Sophia, a monument to the values so viciously disputed, survives; brilliantly beautiful mosaics dating back to the ninth century have survived, plastered over rather than destroyed and now restored for our amazement. Precious Christian art and religious iconography exist side by side with equally precious Muslim tile, mosaics, stonework and a library. It seems, to me at least, that conquerors abandoned their destructive cruelty and, unusually, saw beauty and sought to preserve it. Istanbul is littered with examples of such common sense and human generosity.

A short walk from the Hagia Sophia is the Blue Mosque. I have not seen as many mosques as I have churches but this mosque is a rare beauty. It is light, spacious, airy and spiritual. It seems to calm its visitors; the thousands of tiles of predominantly blue hues add to the serenity. It is huge. It is a rare place managing to project tranquility and peace for thousands of visitors and worshippers alike.

These two buildings struck me as emblematic of the Istanbul that others have described to me, a city where cultures have clashed and commingled, where political/religious movements filled with energy, ambition and desire to dominate have clashed in massive battles yet managed to exhibit the civility to preserve some humanity in the process. It seems a place where conquerors adopted and adapted the best of their subjects’ cultures with an open-mindedness and a grace that allowed such icons as the Hagia Sophia to survive.

The Grand Bazaar exhibits another key aspect of everything I have heard of Istanbul. It is the home of traders. The spice route, the silk route, the famous trade routes between east and west all passed through Turkey. Turkey was the endpoint of each and the meeting point between the two. Turks became traders, Istanbul was action-central where one set of goods was traded for another, ideas were transferred, cultural values, art and architecture were exchanged. If it was worth a price, it has been for sale in Istanbul’s Grand Bazaar since the fifteenth century.

The Grand Bazaar is living proof of Istanbul’s continued role as a commercial meeting place. It is a stunning place with blocks and blocks of shops under one roof. It is a huge emporium of rug merchants, spice salesmen, artisans, gold and jewelry hustlers, clothing hawkers and purveyors of all manner of goods. It is a shopper’s cornucopia, a Noah’s Ark, with two of everything; clean, relatively spacious, indoors and out of the elements.

What is different – almost alarmingly so – is the lack of aggressive selling. When John and I shop we seem to send a message to shopkeepers; like blood in the water, we attract sharks. In most places like Egypt and the souks of Morocco, we seem to attract the most aggressive vendors; to describe their sales approach as in-your-face would be too kind. In the Grand Bazaar we were NOT accosted; instead we were politely engaged in a conversation, offered tea in a most genial and polite manner. It was engaging, charming, and disarming, and of course it works. Developed, honed and adapted over centuries, it lulled us into a sense of calm and we succumbed. I now have enough gifts for folks back home to last well through birthdays, special events and the next few Christmases. I have been separated from my money and laden with bags; at least the Turks make it fun.

And the food! The food is extra-ordinarily good, much like our more familiar Greek but more complex and diverse, using a wider range of herbs and spice. Who knew eggplant could be so tasty? Who would put vegetables at the center of the plate, cooked in so many tasty and appealing ways? Fresh vegetables, fruit, herbs and and a world of spices abound; Istanbul even has a specialty spice market to astound us all. I know; I now have a year’s supply of saffron. Why have we not imported mezzes? These small dishes, like Spanish tapas, allow us to graze across a larger range of dishes without filling up on one dish alone.

We stop at stands for a glass of freshly pressed pomegranate juice; my new drink of choice.

I am enthralled. Istanbul was a delight. Two days, hah – I will need two years to discover even a bit of it.