Posted on March 29, 2015 by bfoulkesadventures

I have spent the last three weeks on the Camino Portuguese, a 600 kilometre Pilgrimage from Lisbon in Portugal to Santiago in Spain. I walked across Portugal, village to town to city, along ancient cobblestone paths, following the Via Romana XIX laid out by Romans in the first and second century AD, through woods of pine and Eucalyptus and on many paved roads busy with traffic – my big adventure through the daily lives of people. 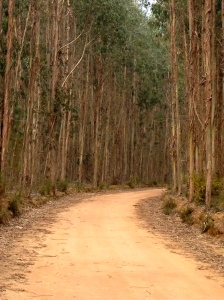 I wandered forest paths that had been cut several feet deep into the earth by the passage of feet, small vehicles and time. I wandered through villages too small to be called such and modern bustling cities with public transportation systems that Vancouver could only envy; we will never achieve public transportation that is so efficiently woven into the human highways of daily life. It was spring, farmers were in their fields, the first signs of life were ready to burst out everywhere, vineyards were carefully clipped for this year’s buds and flowers were blooming everywhere. Oranges and lemons were abundant on every tree.

But I digress, sort of; fueling my wanderings in all its splendiferousness was bread – Portuguese bread.

I love bread. Like ice cream, it is definitive proof of the existence of God. That is how much I cherish bread, I’m willing to rank it in the same category as ice cream. How fitting that, on a pilgrimage, my mind turns to the sanctity of bread. The Portuguese have set the standard by which I will forever judge the bread of other countries and other cultures.

The Portuguese bun is a precious work of edible art. A week into my walk, on a Sunday, at about 2 PM, I trudged into Mala, a speck of a village about four hours walk north of Coimbra. I was tired and hungry and had another two hours of walking ahead of me. In a village this small, I did not expect to find a cafe, much less one open on a Sunday in the time of siesta. Wonder of wonders, a little chapel of bread appeared – a bakery, open and thriving. Fresh from the oven, still warm, the baker created the perfect sandwich, a slice of ham, a slice of cheese on a Portuguese bun. I had a second, this time with an espresso. I thanked her profusely with the only Portuguese word I can confidently command – Obrigado – left her a tip and wandered into the sunshine, grateful beyond words. The Portuguese bun had just been elevated to an object of veneration, worship even.

A few days later, in Porto, I stood in line to sample another simple but sublime work of art – the pork sandwich. At Casa Guedes, a nondescript cafe a few minutes walk from my hotel, I dined, yes dined, on two of the best sandwiches I have ever consumed. I sat at the counter, inches from the chef, as he carved through a roast leg of pork that was all crunchy on the outside, juicy, soft and tender inside. 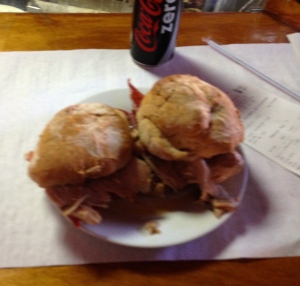 The menu was simple – pork sandwiches. Businessmen jostled with students, office workers, tradesmen and locals, sharing a few outside tables and patiently waiting their turn. It was sunny, I was the only tourist in sight, a sure sign Bourdain hadn’t discovered this place yet, ruining it for the locals. Another bar, Conga, bastes thinly sliced pork in a spicy sauce and dollops it generously on Portuguese buns; eating is messy but who cares, the taste, the flavour is everything.

Is this heaven; no it’s Porto.

Bread sustained me through my walks. Morning started with a pastry and coffee, rivaling any I have partaken on Boulevard Sainte Germaine in Paris. I’m a slow but steady walker, so lunch for me was a quick drink and a sandwich – a Portuguese bun, ham and cheese – simple, delicious and impossible to duplicate. 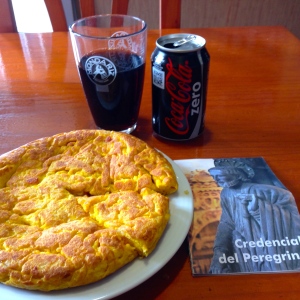 In another unexceptional looking cafe/bar along the local N road, I stopped for a late lunch. There was no menu, but through hand signals and a few words for which we shared a common understanding, the senora and I finally settled on a tortilla, a potato-based omelette, more like a fritatta, usually precooked and sold as a tapa for the harried and hurried traveller.

Not me! We slowly talked our way through the possible ingredients for MY tortilla; she served up my Coke Zero, stamped my credential, and bustled off to the kitchen. In a few moments she delivered the perfect Portuguese tortilla – light, fluffy, spicy with her chorizo stuffing, a five star roadhouse meal. I loosened my boots and relaxed into a European lunch, must have been there an hour… 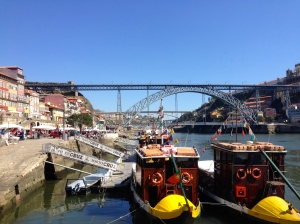 I fell in love with Porto, and not just for the food. Miguel, my personal guide to Porto, (www.oportoshoretours.com) expanded my view of Portugal beyond the bread and pork sandwich. He also opened my eyes to the history of Portugal, especially the Portuguese sailors and explorers and their impact on the world. Did you know tempura batter in Japan was actually Portuguese, introduced in the 15th and 16th century by Portuguese traders long before other western contacts with Japan? I had one of the best samosas I have ever tasted – another culinary invention transferred to Goa and India by the Portuguese after they learned to circumnavigate Africa to establish an oceanic spice trade breaking the monopoly of the Middle East spice road. It’s now back in Portugal, reclaimed. 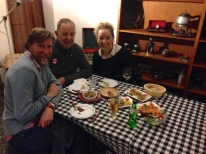 I have decided that Tapas are Portuguese and they are good. A few bites of a number of specially prepared dishes is better than a whole meal of only one. Variety and quality are winning the battle over quantity. And, they arrive slowly, extending the sharing of food and the opportunity for pleasant conversation.

In case you haven’t got the point yet, here it is. Portugal is a hidden gem. I went off to Portugal to do a pilgrimage, a fast flat walk to Santiago; I had done this once and fond memories moved me to try it again. I did not set out because I wanted to see Portugal.

Yet from the start, Portugal captured, captivated and beguiled me. It is a country steeped in history; the Portuguese were fishing regularly off Newfoundland and trading actively with Brazilian indigents long before Christopher Columbus ‘discovered’ America. They have a bold, inquisitive, global, complicated, robust history; it makes for an interesting country.

After a few hours with Miguel in Porto, I knew I would need to return; when scratching the surface reveals gold beneath, one is compelled to return. Miguel and Jennifer, a Canadian expat, and her parents introduced me to FC Porto, a Champions league-caliber football team, community owned at a time when Saudi sheiks have trouble funding that level of play in larger cities.

The country is not without its challenges; I was most aware of the emptying out of the rural areas; there seems little left in the villages but old people and noisy roosters.

Yet, in these villages, gardens are lovingly tended, house are covered in clean well-kept tiles, (don’t get me started on the Portuguese use of tiles, many Portuguese tiled buildings would be national treasures in any other country) and every place seems to have an outdoor patio complete with a barbecue.

Many small towns have retained a special nature – they are jewels. Ponte de Lima rivals San Sebastian in Spain as amongst the most beautiful small towns I have ever visited. The town is joined by a 300 meter bridge over the Rio Lima that dates back to the 13th century. It is a beautiful town, historical yet modern; so much so, I was tempted to check apartment prices.

Back to bread for a moment, even in the smallest village, fresh bread is delivered every morning, one loaf at a time, door to door. A community that can deliver daily bread to your door is a healthy one.

I went to walk through Portugal; I fell down the Portuguese rabbit hole and fell in love with Portugal. I was beguiled by the people, the history, the culture and… the bread. I went off on this journey, as I always do, in search of an epiphany. Portugal and its bread weren’t quite the epiphany I expected to find, but epiphanies are where you find them.