The Power of Engagement.

Posted on October 2, 2015 by bfoulkesadventures

The Power of Engagement

Over the past two months I have been fully immersed in the upcoming election; at 78 days, the longest is current Canadian history.

These are wild rides. They take me out of my comfort zone; way, way out.

I am thrown together with men and women half my age, most of whom have never been involved in a Federal election. They are bright, smart, energetic and engaged. They bring a new set of social media tools which are mysterious and intimidating.

We are all thrown together for a range of reasons. Some want to rid Canada of Harper, some care passionately about an issue, some have a personal connection to the candidate, some think Trudeau IS ready. Building a team of such diversity demands time and energy.

My orderly and predictable life is turned upside down. I spend most of my time in an empty retail store space, bare walls, cement floors, no frills. It’s filled with cast off furniture, campaign literature, phones and computers; people coming and going, lots of energy and hustle. Halfway between a start-up and a pop-up, it is a one-off project put together for 90 days; here today, gone tomorrow.

Less sleep and more fast food, lots of driving, my exercise regime is non-existent; all to facilitate the completion of a bottomless list of tasks intended to push my candidate across the finish line with more votes than the others.

I am stretched to do things I have not done much of and decided long ago I do not like. A part of this is age, a hardening of the attitudes and a fixation on comfortable routines. A part is laziness; it is easier to communicate via Face-Book than face-to-face, send email rather than pick up a phone.

Not now. My desire to be alone, my need for quiet, my urge to isolate myself from foolish encounters with foolish people – all are set aside until election day.

Over the past two months, I have stood on a street corner waving a sign and occasionally dancing to the vibe of success.

Woohoo! – someone honked at us!  Woohoo! – a trucker gave us his big horn blast!

I have made 80 – 100 cold calls trying to get total strangers to come to just one meeting with my candidate. I have sent out emails to people asking for MONEY, and then I have called them to follow up. I have gone door knocking – asking complete strangers, face to face at their doors who they are thinking of voting for; then trying to convince them to vote for my candidate. 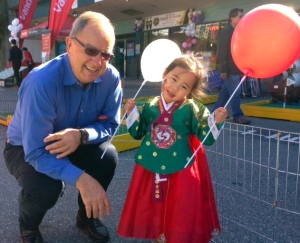 I have spent time at Sunday dim sum, Korean festivals, Portuguese bakeries; I’ve tasted incredible Indian food at a backyard event with Margaret Trudeau. I met a man who won an $800 million lawsuit for veterans against a cold-hearted government that fought them every inch of the way. I’ve met passionate, engaged Canadians I would have never encountered except in the great messy inclusive melting pot of politics.

I have had the privilege of working with Terry and Ravi, a remarkable couple. He will be an ideal Member of Parliament for Burnaby North – Seymour, trust me.

All this was unthinkable – until I did it. Then it was, well, thinkable.

The remarkable part is that people were kind, open, convivial and willing to talk to me. They took my calls, they gave us money, they came out to our events. They allowed us to put a sign on their lawn, they opened their doors and engaged in a conversation. Not always, but enough to keep me coming back. 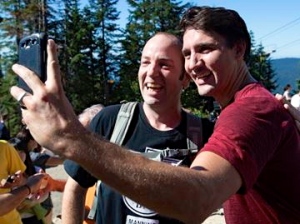 All this was made infinitely more enjoyable because Blair was with me on most of these trips outside my comfort zone. He had my back, he was enthusiastic, engaged and diligent. We door knocked, we burma-shaved, we pounded signs – he even let me pound some signs in on my own. Come to think of it, I was his wingman; he was doing and I was supporting – and learning. His high point was doing the Grouse Grind, his first ever, with Justin Trudeau – priceless.

There were successes – the wonderful sweet spots that validate what we are doing. Here’s one:

Blair and I were canvassing one Sunday. I rang the bell, a man my age answered and we started to chat. He was hesitant to talk but became more open and engaging as we went along. Blair joined us from across the street. Our voter was informed and opinionated. Blair was determined and persuasive. In the end, we shook hands, parted.  We had tried but marked him down on our list as NDP.

That day, he sent a long email to our candidate:

Terry; I have done something that I have never done before and that is to change my vote. Normally I stick to my guns but something happened today that made me realize that throwing my vote to the NDP (not something I normally do) but Mr. Harper has made me desperate for a change.

Today, I was visited by two of your ‘followers’ and by followers I mean two down to earth fellows. A father and a son both very good at getting out the vote. I had a great talk with them and since I do most of the talking, (bad habit) I felt that I was doing a good job of standing my ground except when the father brought up a very important point and one I had not really thought about. Now that Burnaby North is part of the north shore the voting base has changed. I was aware of this but what I was not aware of was that the north shore has voted twice for Cons and twice for Libs!

That got me to thinking that a vote for the Libs was a better move than a vote for the socialist hordes.   I have never been a big fan of the NDP more for provincial reasons and the total screw-ups they were when in office. But I had hopes for the Federal NDP so I leaned to them to turf the evil dark lord.

But then the lady running in our area is a ‘lawyer’ and there’s only one thing I loathe more than a lawyer and that’s a lawyer in politics! Probably the worst single group of people to elect.   Anyhow, since we are moving soon we will cast our votes at the polling office in the Brentwood mall this week.

So you can count on at least two votes where before you had only one.

It is called participatory democracy for a reason. A conversation with a citizen on his/her doorstep is still the most powerful campaign tool in a democracy.

So, with two weeks left in this campaign, if you have a candidate you support, I urge you all to get involved. It is not too late. Go volunteer, pitch in, take a sign for your lawn, donate money, honk at the crazies who are out burma-shaving at dawn, make a few calls, attend a meeting.