Posted on October 28, 2015 by bfoulkesadventures

The October 19th election of the Trudeau Liberals was historic. For many reasons. 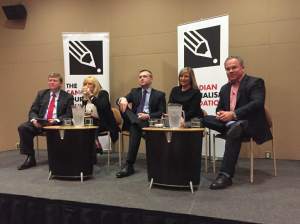 If last night is any measure it will soon become historic by another measure – the number of people who claim they, and only they, know what actually happened. The Canadian Journalism Foundation hosted a public event; five of Canada’s pre-eminent journalists discussed the election. It was a love-in of epic proportions. All five offered bon mots that had themselves at the center of this historic change; some claimed a small measure of responsibility for the outcome, some claimed a larger wedge of the victory pie – success has many parents.

It was strangely un-nerving; the election they each described, while oddly familiar, did not mirror the election I experienced. Above the usual smug inside-baseball, I-know-more-than-you comments that justify their exalted position as arbiters of taste and political mores they were, I realized, delivering the first revision of a history I had seen with my own eyes.

Not to be outdone, I am taking a page from Winston Churchill;

“History will be kind to me for I intend to write it.”

I’m joining in this Canadian mud-wrestle before winter sets and the mud hardens (get the metaphor..?…of course you do). I’m going to write history in my image.

There is one hallmark to good history writing –  remember Paul Simon;

This election marks the beginning of generation change in Canada!

Look out, baby-boomers, Justin Trudeau is casting us aside. Its not just about legalizing marijuana. Hah, that it would stop there. Angry white guy saw it first and it terrified him; he said some naughty things, it’s the end and he didn’t like it. Old people lost their power in this election.

The Tories were hoping that old folks would win the election for them. We vote. This time young people showed up; instead of 61% of Canadians voting, the young rascals, whipper-snappers, turned out in droves, raising participation to 68%. It was Justin’s secret weapon; guess what, the kids didn’t vote for Steve or Tom. I’m guessing there was a lot of underage voting sneaking in under the wire.

Need more proof? Justin did the Grouse Grind, we grousers were left grinding our teeth at that one. Imagine Steve, Jason and Joe in their lululemons doing the Grind – nope, I can’t either. Not without the North Shore Rescue folks and their portable defibrilators tracking them just out of camera angle.

You want more? Paul Godfrey, quintessential rich old man, cracked the whip and forced all the PostMedia newspapers to write editorials to support Steve, as did David Walmsley at the Globe and Mail. In a fit of Houdini-like contortionism, Walmsley escaped the bounds of rational argument to do so; he deserves a medal for debasing himself vainly trying to save us, it must have hurt.

They shouldn’t have bothered, it mattered to no one. All it proved is their impotence, nobody reads editorials except old white men and families of the editorial board forced to do so. Not many young-uns read newspapers at all so they didn’t have to even reject the doom and gloom, they just went on telling each other on Facebook and Instagram to vote the old men out. Irrelevance is doing a death dance on those editorial boards. 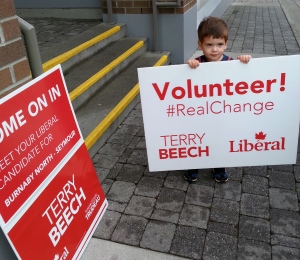 In my little corner of the world we were swamped with kids. It was an egalitarian, gender- balanced, United Nations of volunteers – unlike anything seen in the good old days. They ran around yelling ‘forward not backward, upward not forward’. citing some obscure television program called the Simpsons.

Our candidate, described by an elderly journalist friend as 34 but looking ten years younger – swept the riding, winning handily by a 3000+ vote margin. He knocked off a retired Judge and a municipal councillor who couldn’t bother to show up for all candidate meetings. He’s now a Member of Parliament on a mission. Change! Change! …and more Change! 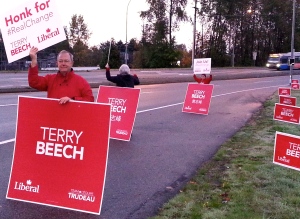 Our whole election team was young…. well, with a few exceptions. I was old but searched for usefulness, Becky, retired, was our best canvasser by a thousand doors. Jill, another retiree, did the whole sign program; we elderly all got up at 6AM to wave signs so the kids could sleep in, but really, other than that, it was all young people. Art Lee, a retired MP created events to showcase Terry. Bob, the other more handsome Bob, wrote reams of useful propaganda.

So, friends, you heard it here first. This election was a watershed. The young are finally pushing the old out of the way and taking control of power.

I tell you the world is going to hell in a hand cart. And who is going to pay – bingo to the grey haired man in the front row – we are!

The future is bleak my grey haired friends. It’s no wonder angry old man was angry – he has seen the future and it is bleak.

As for the Supreme Court demanding new legislation on assisted suicide; let’s slow down and think this through a bit folks. Let’s not be hasty…

1 Response to Plus ça Change…