Sandra gives us more than yoga.

Posted on November 17, 2017 by bfoulkesadventures 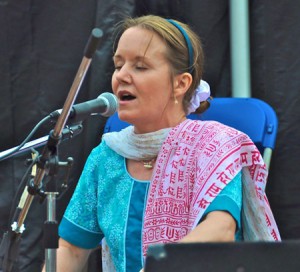 When I moved to Vancouver in early January of 1999, I moved into the West End, a small enclave near downtown Vancouver. My backyard, literally, is Stanley Park. The West End became my community, MY hood.

I joined the Running Room in the hood. It became my second home, the gathering place for my running buddies; a decade of running cemented friendships, a decade later, I still call some of those runners my friends.

In the heart of my hood is the West End community center. The community center vibrates with activity; most importantly for us was  the offer of yoga classes. We needed a bit of help to stay loose, especially after long Sunday runs.

I signed up for my first yoga class at the West End community center.  It was all a big leap for a prairie boy from Calgary; Vancouver, the West End, running, Yoga.

My friends held my hand and nurtured me through the door. There we met Sandra, petite, bubbly, as full of fresh-faced energy as the energizer bunny and as enthusiastic as Pippy Longstocking. She was the ideal yoga instructor; central casting couldn’t have done a better job.

Every Monday evening we joined Sandra in her beginner level yoga class.

She introduced us to yoga, slowly moving us through the Sun salutation, interspersing her examples and instructions with a few exotic Sanskrit phrases and many spoons-full of encouragement. I managed to learn how to stand on one leg, not quite mastering the intricacies of the downward-facing dog but not falling down at crucial moments either. I relaxed a bit, becoming quite content to practice my moves in the dark back corner of the class.

Sandra’s classes became an oasis, a valuable and necessary component in our weekly training routine.

I never aspired to move to more complicated classes, being satisfied to just enjoy Sandra’s healing classes. She didn’t exactly encourage me to take the advance classes.

I saw it more as stretching than yoga, it sustained my running career well into my late fifties. I never got any faster but I managed to finish my marathons, half-marathons, and long Sunday runs – upright and usually smiling.

I have been a peripatetic but loyal participant in her classes ever since, now stretching over the past two decades. I keep coming back, usually when I am stiff and sore and need some remediation for my various attempts to remain permanently young. My reach always exceeds my grasp. 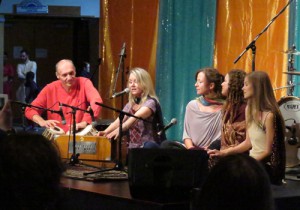 I am at the periphery of her life but have had the good fortune to observe as she has grown and developed her personal practice, adapting and expanding the ways she serves this community. She is a staple at the West-End community center.

Over twenty years at the West End community center she has provided Yoga classes to thousands; even now, she continues to offer classes in yoga; Hatha yoga, Dru yoga, restorative yoga by candlelight, guided meditation, kids yoga and yoga for men. She now also offers classes at the nearby Coal Harbour Community Center. She has started a class called Chair yoga – she is determined to keep us moving!

She has mastered the Harmonium, now offering music and songs as part of her Yoga practise, Her yoga practice is now more holistic – not just for body, now also for mind and soul.

My current favorite is yoga over 50. She flatters us, we are not being checked for ID at the door. It is a morning drop in; the room is always full. More than 40 devoted followers find a space for a gentle 90 minute workout she has developed to keep us moving, happy and healthy. The cost is a paltry $2.50, the best yoga value ever.

Her carefully chosen program offers movement, stories, jokes, guidance on everything from nutrition to the circadian rhythms, to the impact of sun, moon and seasons on our physical, emotional and spiritual lives. Her warmth, her inclusiveness, her genuine enthusiasm for life are all contagious.

I particularly like the relaxation stage at the end; as we lay flat on our mats, eyes closed, she sings to us in her sweet melodious voice. We are all refreshed, optimistic, freer, more energized.

Sandra keeps growing; she has come a long way since those first days in 1999.

She has produced two CD’s and has developed a class on the local Shaw cable channel, Yoga Moves for Every Body.

I have watched her expand her talents to teach, to involve and to bring joy to our West End community – she is now a neighbourhood institution.

She is our Fred Rogers, the host of Mr Roger’s Neighborhood. Like Fred, she is a helper.

Fred Rogers said that in times of difficulty we should look to the helpers.

Sandra is one of those helpers. Every community is filled with helpers, we just need to look for them, recognize them, and celebrate them.

She has enriched the lives of West-Enders for more than twenty years. We are all better for her contribution to our community, our hood.  We are healthier, we are more engaged ourselves, her involvement is contagious. She has offered her own brand of positive living therapy to us.

In every community there are people like Sandra;  they are the glue that hold our hood together. I hope we all pause occasionally and reflect on their contribution to our lives and to our community. I hope we all stop them and say thanks.

PS – Sandra has produced two CDs of music that are quite remarkable. A third has just been released.

For more info and information on purchasing her music go to;

This entry was posted in Uncategorized and tagged chair yoga, give peace a chant, vancouver yoga, weest end community center, yoga, yoga moves for every body. Bookmark the permalink.