Posted on January 24, 2018 by bfoulkesadventures

There is a restaurant called Bollywood at Jungfraujoch, an amazing Swiss tourist site in the middle of the Jungfrau range. It serves authentic Indian food to some 1000 happy customers a day.

An Indian restaurant in the center of an iconic Swiss destination becomes understandable when Kristen and Chris explain that the Jungfrau has featured in several famously successful Bollywood movies, as far back as 1964. Yash Chopra, the famous Indian film director, has shot so many sequences for so many films over the years that the region has become one of the top destinations for Indian tourists – hence the Bollywood restaurant. He’s so famous, a Jungfrau railway train has been named after him.

It isn’t just India, many of the Bond films over the years have featured the mountains of Switzerland. A not-so-good Clint Eastwood film, The Eiger Sanction – based on the best-selling novel – was centred on the Jungfrau. There have even been a few clips from Star Wars with the Jungfrau as backdrop.

We are in Grindelwald for a Swiss Christmas. Nestled below the Jungfrau range, it is a gateway for hiking, mountain-biking and marvelling in the summer and a whole range of outdoor pursuits in the winter. We are attracted for the same reason as Bollywood directors, it is an oasis of Swiss beauty.

Kristen and I first visited the region a few summers ago as hikers. She managed to cajole and bribe me into hiking from Lauterbrunnen to Kleine Scheidegg with the promise of the best Swiss macaroni EVER!!!

The Best Swiss Macaroni EVER!!! got my full attention. It was enough to get me started up the steep slope, pride made me continue. After three hours of the most strenuous yet beautiful walking through idyllic grassy fields appropriately adorned with Swiss cows and their Swiss bells across a valley where ice from hanging glaciers crashed noisily down mountain faces, I managed to make it to the magical place that served the best Swiss macaroni EVER!!!. 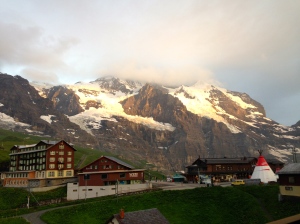 After our al fresco lunch of the best Swiss macaroni EVER!!!, we settled into a local hotel and stared at the Jungfrau for hours. Like a poor man’s fireplace, the clouds, the sun, the light and shadows created a panoramic reel of ever-changing perfection, enhancing the endorphins released by the walk and the sublime somnolence that comes from a full tummy. 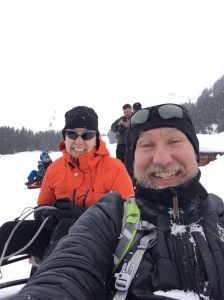 Now we are back to experience winter in the Jungfrau. If anything it is more entrancing! More beauty, more activity, more liveliness, more energy; the Swiss and those who choose Grindelwald are here to enjoy winter. Ski lifts abound all over the valley opening up the whole area to thrills, chills and spills. Sledding slopes are filled with young and old speed-demons, snow-shoe and walking paths abound, there are even hang gliders dotting the clear sky.

Everyone is busy enjoying winter. As we come to expect, It’s all Swiss watch efficient; we have trains direct to Grindelwald, local bus service every half hour from the village to our rental, a full service supermarket and many excellent restaurants. This is the way to spend Christmas holiday!

I’m encouraged to visit Jungfraujoch. At 3454 metres, it calls itself the Top of Europe. The Jungfrau (4158 meters) is the namesake; aligned with it in a massive wall of mountain that leaps from the lower valley of Interlaken are the Eiger (3970 metres) and the Monsch (4107 metres).

Unfortunately, none of the three qualify as “Top of Europe” mountains – that prize goes to Mont Blanc (4808 meters) in France.

Rare Swiss hyperbole aside, the Jungfrau is justifiably famous around the world, iconic and remarkable in its beauty, so famous it is an international movie set – transcending all boundaries.

This time we take the trains, I’ve walked part of this once, no bragging points in doing it again. The Bernese Oberland Railway is a marvel of Swiss design and efficiency; constructed at the turned of the 20th century, it connects Grindelwald with the funicular Jungfrau railway that takes up to the Jungfraujoch. Most of the passage is tunneled through the granite of the Jungfrau – there’s a stop allowing us to view the valley through a window cut in the mountain face.

Jungfraujoch is a complex built into the mountains in the shadow of Jungfrau itself. At the top is an observation viewpoint allowing a full 360 degree view of the valleys and the Aletsch Glacier. Deep inside the mountain is the funicular station, a state-of-the-art film tunnel, a glacier walkway, an interior ice palace, a chocolate shop and a watch shop and among others, our favorite Bollywood restaurant. Everything the modern tourist needs and a chance to buy Swiss watches, Swiss chocolate and Indian curries.

We are blessed with a clear day, we can see forever in all directions; It is the Switzerland of postcards and tourist posters.

Serendipity has opened the door to Swiss delights; I’m at a place of sublime beauty – following Chris and Kristen on their adventure has opened a new window – a new adventure – for me.

The Swiss Alps in winter are so beautiful they deserve to be background to Bollywood movie stars, James Bond, Clint Eastwood and Princess Leia. To see them on the screen is surpassed only by being there – really being there.

It truly is that magical a place.

1 Response to Jungfraujoch, Top of Europe.