Posted on October 30, 2019 by bfoulkesadventures

On September 4, I walked into the downtown campus of Simon Fraser University as a student, a real bona fide student. I had my own student card, I had a student account and a password that helped me navigate the labyrinth of rules and regulations guarding entrance to this august body.

I’m now into week nine of the first semester; a progress report felt due.

But first, a recap. Last year, I managed to stow away on a field trip organized by the Graduate Liberal Studies program at SFU. We spent three weeks in southern Spain, half doing it as a course for credit in the program, half as spouses of students, alumnae, itinerant vagabonds and other riff-raff. Truth be told, I was the only riff-raff. 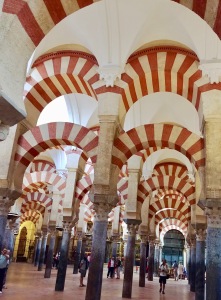 The course was a study of the Islamic influence on Spanish culture; the Moors as they were called, ruled most of Spain from the 7th to the 14th century, in an uneasy relationship with the emerging Christian population and a significant Jewish community.

It was a delightful experience, enthralling history brought alive by our professors and guides and filled with constant conversations amongst my fellow travellers. I was hooked.

I applied to become a student in the Master’s program, was accepted and became a student on September 4th. 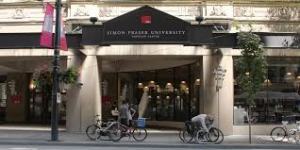 My week starts on Wednesday. I walk to the downtown campus for a 5pm dinner with my 15 classmates and our professor, Dr. Colby, for the first semester. The dinner is integral to the process, a freewheeling discussion on past classes, readings, interpretations of readings, off-topic insights and other matters that facilitate bonding.

We then adjourn to the classroom across the street for a three hour seminar on the topic of the evening. Yes, three hours. I know!

At around 9:30 pm, I’m spun out into the street and off into the night. I wander home, dodging the nocturnals, most important of which are the skunks out foraging. I have to be careful because I’m in a bit of a state; the evening’s discussion can leave me gasping for air and feeling a little light-headed and therefore distracted, I need to remember to watch for the skunks. They do not like surprises!

The rest of the week is filled with getting ready for the next Wednesday. Some of my classmates work; I do not know how they survive.

The requirements for the degree start with the two mandatory courses; Reason and Passion – I & II. The curriculum has been built, refined and tweaked over some twenty nine years by Dr. Stephen Duguid, the first Director; his stamp is still evident.

This semester our reading list ranges from Sappho, an enthralling Greek poet (her powerful words touch crusty old men across 2500 years of time), Plato (who knew he wrote important works other than the Republic?), Anne Carson (a Canadian, a McArthur fellow and author of a book designated as one of the 100 most important pieces of non-fiction of all time!), Virginia Woolf (I regret not having discovered her earlier in life, who knows how things might have been changed?) and Tompson Highway (another distinguished but often overlooked Canadian).

It is a tough reading list, the three hour moderated discussions are even more challenging.

Some nights, I emerge from the building feeling almost bereft, certainly adrift. How could I have missed so much of import in the readings, how could I have ignored the subtleties, the nuances, the oblique references, the true meaning of the work?

I have chosen not to google-inform myself, if I find meaning I want to do it on my own. So far it isn’t working, I’m not finding as much meaning as I should. Is it true that deep down I am really shallow? Should I even be here?

On other nights, I am positively giddy with excitement, excitement that comes from getting it, an Aha moment, a fruitful discussion in which I am a full participant, where I have understood enough to even be a contributor.

It’s early days but I am sure of one thing, I’m getting my money’s worth. I’m getting some exercise, I’m meeting new and interesting people, all of whom are radically outside my circle of friends, I’m reading works and discussing ideas that are provocative, and generally insoluble and I’m learning again. It sure beats some of my present distractions and, as they say, it keeps me out of the pool hall.

There is one other aspect to this decision to become a student.  I bought my first pair of Dr. Martens. I’ve always wanted a pair but thought that my time had passed, my false sense of propriety in fashion precluded the purchase. but being a student has opened the door to new fashion possibilities, so I jumped. 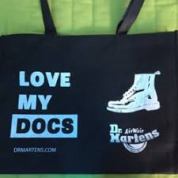 Now, they’re not the big flashy high top ones that scared me when I first saw them, they were too much. But I have the iconic black lace-ups and I wear them to school every Wednesday night.

They’re not exactly Dorothy’s slippers but they’re mine and i’m wearing them. So there!

This entry was posted in Uncategorized and tagged Back to school, Dr. Martens shoes, graduate Liberal Studies Program, midlife adventures, Off the Couch and Out the Door, Simon Fraser University. Bookmark the permalink.

8 Responses to School Daze I