Posted on February 25, 2015 by bfoulkesadventures 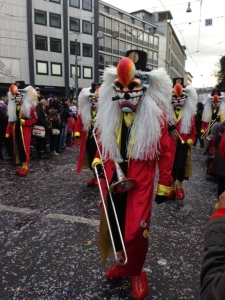 My travel books are filled with fascinating stories of spellbinding, often bizarre rituals, rites and celebrations – inexplicable to outsiders but filled and layered with meaning to the locals. Most times, the more isolated the culture, the more fascinating the event.

Then there’s Basel Fasnacht. Listed as one of the biggest carnivals in Switzerland and noted as among the 50 top carnivals in Europe, it is truly fascinating, as spellbinding as it is inexplicable.

Fasnacht traditions can be traced back to the 13th century. The particular timing of Basel Fasnacht celebration, one week after Ash Wednesday, seems to date back to the 1500‘s. 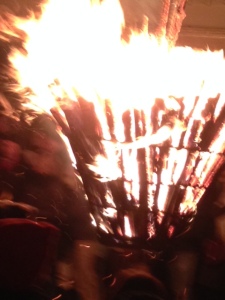 We begin our celebrations by marking the fire celebration in the town of Liestal, a ten minute train ride from Basel. On Sunday night at precisely 7:15 PM, the lights of the town are darkened and a parade of fire commences. It seems scarier than it is, but is a wonder to behold – a long fiery procession of heat, light, sparks and smoke. 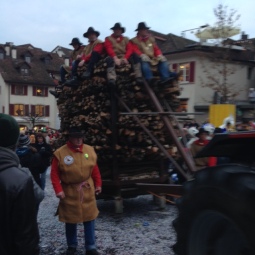 No fire department in North America would allow it, yet here, we cheer and clap, hoot and holler to show our delight. 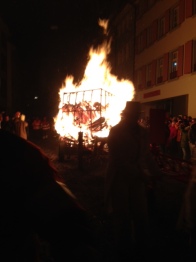 Don’t we all love a bonfire? Shouldn’t we absolutely adore massive moveable bonfires preceded and followed by individual bonfires? 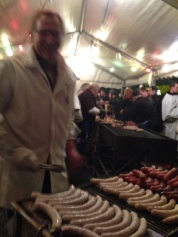 With fire, we drive back the night, we drive winter away and we get to dance before the flames.

It is primal. I am compelled by some inner brain cortex to celebrate with the consumption of burned meat from beasties – a bratwurst will do. We leave smelling like boy scouts after too many campfires. 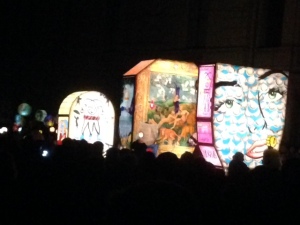 Three hours later, we’re up and heading for Basel’s old town. At precisely 4 AM, the city lights are turned off, plunging us into darkness. This is when Basel Fasnacht begins. 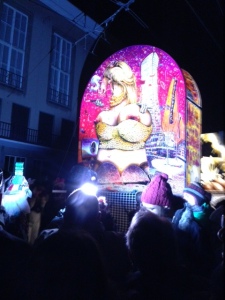 Begin it does! Cliques, social organizations at the heart of the celebrations, begin their parade. Dressed in inventive, wildly creative and often bizarre costumes, cliques roam the old town, each member adorned with a lantern on their head, each clique carrying or pulling large luminous floats adorned with pictures, graphics and satirical messages on issues of the day, heralded by their own piccolo and drum band. 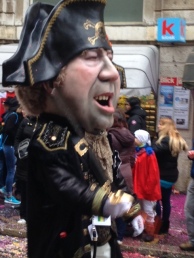 It is a visual and aural cacophony – we are here to witness this culmination of months of design, construction, practice and coordination.

Cliques march through the streets for an hour, crossing paths, circling about, pushing through crowds, making music, all in a glorious celebration – one that has been a tradition since before Canada was discovered.

The next 72 hours, precisely – no more, no less – are filled with parades, floats, costumes, masks, music, and confetti.

Ahh, yes – the confetti. Basel Fasnacht is synonymous with confetti; the reputation is deserved. Confetti is thrown at the unsuspecting with abandon for 72 hours. The streets are awash; we manage to carry a healthy supply home to shake loose throughout the day.

The various cliques on parade also throw out flowers and candy and, to us at least, other unusual gifts. We came home with oranges, lemons, carrots, onions, even a cigarette lighter – unfortunately we missed getting any leeks. 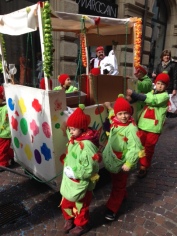 Tuesday is a bit quieter, a family and child oriented day where children are dressed in whimsical, colourful costumes and allowed to throw confetti with abandon. One, a charming cherub on a float, offered me a candy; as I reached out to grab it he showered me with confetti – they learn early and he was delighted to have tricked me. 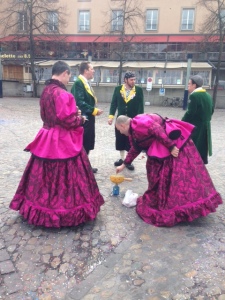 Between parades, performers take a break; a beer and an impromptu fondue in the old town square by men dressed in dresses seems normal during Fasnacht. It is charming, fascinating, ironic and uniquely Swiss.

The creativity of the designs, artwork, costumes and especially the masks are so different from America, more Cirque du Soleil that Ringling Brothers.

The music of the fife and drums will roil around my head for months to come and I will forever remember the eery beauty of that pitch-black moment heralding the 4 AM parade. 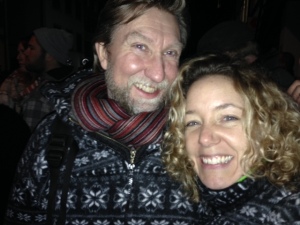 This is Christopher’s and Kristen’s second Fasnacht and they are ardent promoters. Kristen summed it up best by declaring that she had seen a warm, playful, celebratory side of the people of Basel that was hidden the rest of the year.

She admired them for their celebration of Fasnacht. They allow themselves to be rascals for die drey scheenschte Dääg (“the three most beautiful days”)

This entry was posted in Uncategorized and tagged Basel, Basel festival, Fasnacht, fasnacht Basel, Liestal fire festival, Off the Couch and Out the Door, Swiss winter festivals. Bookmark the permalink.